Students representing MACS took third place in the third Oswego County Academic Youth (OCAY) League competition of the 2022-23 school year. The eight-team competition was the 100th in the organization’s history and was labeled the “Centennial Celebration.”

The event kicked off with three major anniversary-themed challenges. Teams from each school district were first challenged to redesign the OCAY League’s 25-year-old logo, followed by a request for student-driven mission and vision statements to replace the original. Each team was also tasked with brainstorming a motto for the event that is both attention grabbing and reflects the values of the league.

"The OCAY League's 100th event challenged students to set the stage for our next 100 competitions,” OCAY League Coordinator Caitlin White said.  “Developing a logo, motto, mission and vision statement is no easy task, and every team successfully met that challenge. Congratulations to all teams on a job well done!"

OCAY League was organized in the spring of 1997 with the idea that academics merit a standing comparable to athletics. Students’ academic skills are challenged and showcased in a wide variety of competitive events that emphasize scholastic excellence, team building, leadership and creativity. A particular strength of the league is its emphasis on cooperative problem-solving. OCAY League is coordinated through the Center for Instruction, Technology & Innovation’s gifted and talented program. 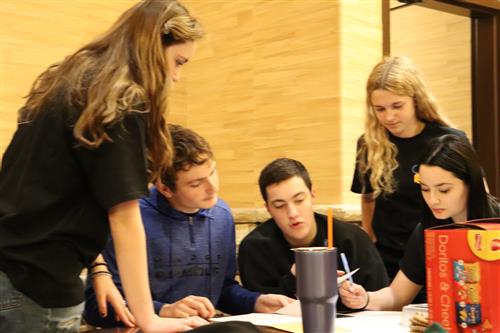