Senior Jacob Hill had always wanted to play football but never acted on it until just days before the Mexico Tigers preseason training began in August. He was unsure but didn’t want to regret not trying, and he ultimately broke a program record in his historic season.

Hill, who a couple houses down the road from football head coach and Mexico Middle School math teacher Tee Murabito, asked about joining the team and focused his attention on becoming the placekicker for the field goal and kickoff units.

Over the weekend, Hill worked with a tee and upon showing up the first day of practice he showed the ability to drill extra point field goals with extra distance to spare, Murabito said.

Hill was named the team’s kicker and went on to nail 36-of-39 extra-point attempts, blowing away the team’s previous record for extra-points made by more than 10. His 92.3% accuracy was noteworthy, but so was Hill’s work ethic and positive attitude.

“I’m really glad he came out and gave it a try,” Murabito said. “He was a great kicker for us, understood his position really well but more than that he made every single practice and was a great role model for the younger guys on the team. We really appreciate everything he brought day in and day out.”

The Tigers also saw success on the gridiron as a team, winning the Section III Independent League championship with a 7-1 overall record that included 7-0 in league play. Mexico won the title on its own turf, defeating county rival Pulaski 24-7 in the final.

In addition to success on the field, Hill excels in the classroom at Mexico High School and the Tigers decided to name him the team’s nominee for the National Football Foundation College Hall of Fame.

While assisting in the application process Murabito, ever the math teacher, ran the numbers on Hill’s weighted grade point average and he let out a laugh when it came out to the exact same as his extra-point percentage – 92.3%.

“I kind of chuckled and went ‘You’ve got to be kidding me,’” said Murabito of the serendipitous moment.

But overall, Murabito says Hill’s story is one that might resonate with students around the county who have always been on the fence about trying that sport or club.

“At the end of the day, Jacob knows he won’t have any regrets and when he looks back someday 50 years down the road, he will have a story to tell,” said Murabito. “It never hurts to give it a try.” 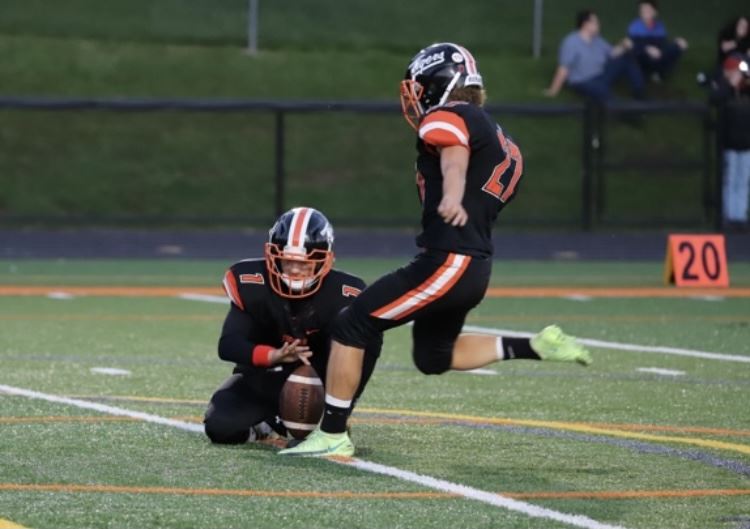