Seniors in the Class of 2020 were treated to an inspirational scene as they came in to collect their caps, gowns, honor cords and special gifts on the evening of Wednesday, June 10.

Vehicles started at the main entrance, greeted by signs before they reached Superintendent Sean Bruno alongside a firetruck and members of the Mexico Volunteer Fire Department at the end of the driveway.

At the cafeteria doors, they were met by class advisors Mrs. Jamie Battles and Mr. Ben McAuslan plus teachers Mrs. Kim Rice and Mrs. Diane Bush, who presented seniors with gifts and cords.

Athletes were recognized by Mr. Andy Gates and Mrs. Kathy Yost as they proceeded along the route, with seniors receiving Tiger Strong t-shirts and a packet.

Then, students received their cap and gown by the gym entrance from a team that included Mrs. Susan Teifke, Mr. James Busco, Mrs. Sadie Blauvelt and Mr. Bill Lighthall.

Vehicles then drove through a back lot filled with socially distanced teachers and staff from the entire district with signs. They cheered each car as they passed by.

The district is very appreciative of all the efforts put in by so many to make this vision a reality.

A full gallery from the event can be found via the district Facebook page at the following link: https://www.facebook.com/MACSpride/posts/3059977724039282 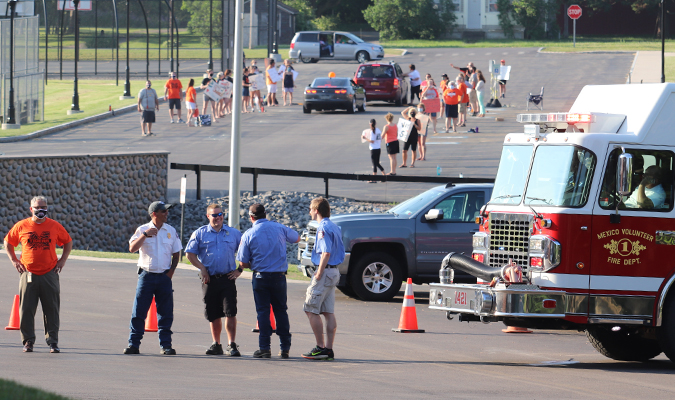