Countless hours of commitment and dedication for the cheerleading team paid off as they reached the state competition.

The Tigers and dozens of the best cheerleading teams in the state converged on Rochester for the state competition, held March 7 at Rochester Institute of Technology.

“It’s been quite a season,” said head coach Stephanie Moretti. “We started out needing improvement and they came in, put in the hard work and earned their spot at states.”

Mexico competed in the Division 2 small schools category against 14 other schools.

This season, the team claimed first place with highest score at the Love to Cheer and Battle of Champions competitions. The Tigers also placed first in their division at the Bling It On competition, second at the Class B sectionals and a pair of third places at the OHSL league meet and the Snowman Showdown.

“I’m just so proud of this group and all their accomplishments,” said Moretti, noting that they along with the 2017 team are the only ones to make it to states for Mexico.

There were five seniors who performed in their final competition with Mexico -- Bond, Shannon, Webster, Wells and West.

“The group has been wonderful and we appreciate all they’ve done throughout their years in the program,” said Moretti. “Just like all the girls who graduate, I’ll miss them dearly and wish them well.”

Additional photos, including some of the team in action during a recent practice, are available on our Facebook page at the following link: https://www.facebook.com/MACSpride/posts/2829894203714303 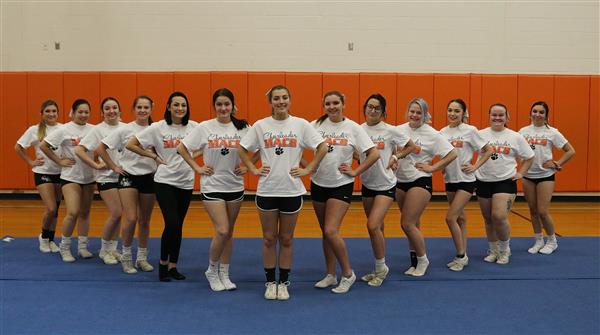