The annual Block M Athletic Awards celebrated athletes and teams for hard work on and off the field this season.

The reception, held June 5 in Mexico High School’s gym, saw a trio of Mexico alumni inducted into the Athletic Hall of Fame and several scholarships awarded.

Senior Brionna Emery and junior William Ruby were honored as the Laurence “Sparky” Rector Athletes of the Year, the final award given out at the end of the night.

The three inductees into this year’s Athletic Hall of Fame class were Russell Daniels (’02),William Dumas (’56) and Blaine Wills (’90). Prior to the ceremony, plaques were unveiled in the hallway outside the gym and all three were recognized on stage at the reception.

After special awards and scholarships were given out, coaches took the stage to speak about their team’s triumphs this season and name a Most Valuable Player.

Listed below are the winners of special awards and team MVPs for the 2018-19 school year.

Fan of the Year: Forrest Meeks.

Senior Brionna Emery and junior William Ruby were named the Laurence "Sparky" Rector Athletes of the Year at the MACS Block M ceremony. 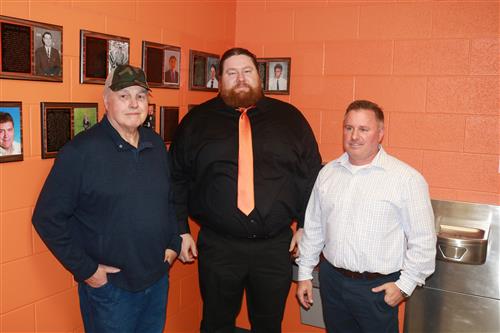 The three inductees into this year’s Athletic Hall of Fame class, pictured from left, were William Dumas (’56), Russell Daniels (’02) and Blaine Wills (’90).